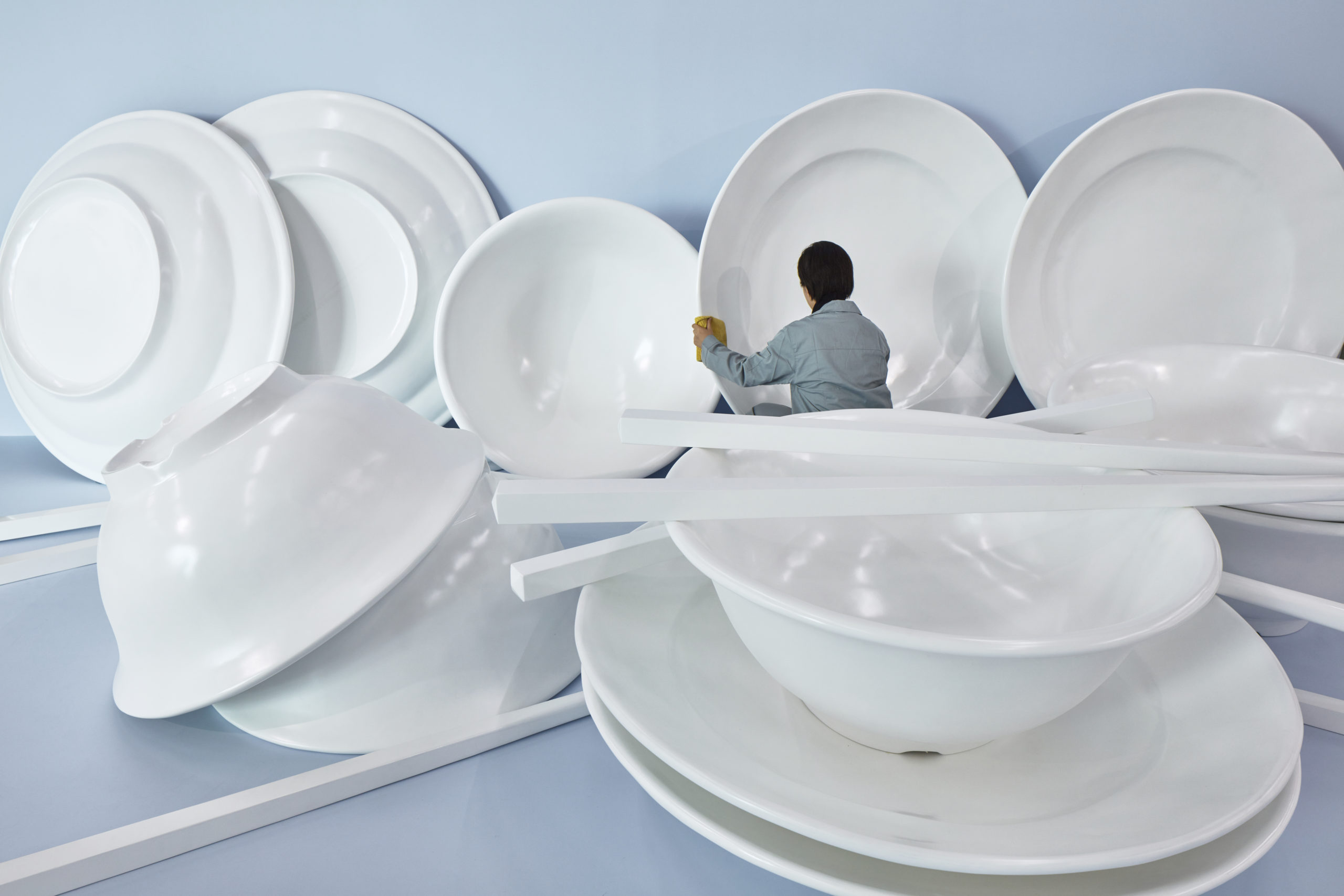 Taiwanese artists active on the international stage react visually to the current global situation through their own contexts, reminding the audience not to look away, but to look closer in, asking the question of who we are, and how to make our voices heard, loudly and clearly, at this urgent time.

Since 1980, art history has been written based more on exhibitions than on groups or movements. Biennials are the most significant exhibitions of them all, playing a leading role in the aesthetics and politics of art. It started with the Venice Biennale, which used the form of the art festival to gather art from around the world on the island of canals, not as a competition but as an event to generate conversation and exchange.

The number of biennials started to grow after the fall of communism in eastern Europe in 1989. They have gradually augmented or even replaced the role of museums in presenting experimental conceptual art. Due to its national pavilion system, the Venice Biennale has become the landmark of international art exchange since the 1990s. Although it has become more of a carnival in the 21st century, the biennial still plays the leading role in the global art scene. Artists who exhibit draw attention through their participation, including in the market.

Taiwan has participated in the Venice Biennale since 1995. Since then, many Taiwanese artists who have participated in Venice or other biennials have been active on the international stage. We can see their works, which explore global issues based on personal contexts, in different biennials internationally. For example, artist Chen Chieh-Jen, who explores colonization, globalization and capitalism in his work, has participated in the Venice Biennale three times. His Empire’s Borders I, exhibited at the Taiwan Pavilion in 2009, focuses on global imperialism, discussing the violence of language and inequality under bureaucracy from the perspective of immigrants. Revolt in the Soul & Body (1996-1999), exhibited at the Taiwan Pavilion in 1999, is an iconic project. The series is based on 13 historical photos depicting torture or massacre. Through digital manipulation, the artist replaces the victims, oppressors, or bystanders in the photos with images of himself. Chen discusses not only history, but also what is forgotten and silenced. To quote Chen: “Looking at history that was deleted is like looking at another contemporaneity hidden in the present. The two need to continuously explore each other.”

Also about history, Marshal Tie Jia (Turtle Island) by Hsu Chia-Wei, exhibited at the Taiwan Pavilion in 2013, uses multiple narratives to interlace the present with the past, mixing personal memories with official history. Hsu is also interested in forgotten histories. He believes that history is subjectively written, not a documentation of reality. Through images, installations and short fiction, Marshal Tie Jia (Turtle Island) traces the birthplace of its titular figure to a pond in Jiangxi, exploring the relationship between myth and popular culture and inviting the audience to redefine the meaning of history.

In 2018, Hsu Chia-Wei’s Ruins of the Intelligence Bureau was exhibited in the Biennale of Sydney. Interweaving reality with mythology, documentation with fiction, the film describes an intelligence bureau to explore complicated issues of identity, collective memory and imagination. As curator Mami Kataoka said about the biennial, “An exhibition should present how human interprets history, and redefines art history and contemporary art.”

History is never behind us. Everything that happens in the present is closely connected to the past, which becomes a part of us. Taiwanese artist Yuan Goang-Ming revisits utopia, looks at war in the context of everyday life, and explores the present and the future. Yuan started working with video in 1984. His work examines how images present the reality we live in, visualizing otherwise invisible social issues in our day-to-day life.

In Yuan’s Landscape of Energy, exhibited at the Biennale de Lyon in 2015, the audience is invited to visit peaceful wonders such as ruins, nuclear waste repositories, abandoned playgrounds, and a nuclear power plant next to a beach. as the lens slowly pans from one deserted site to another, seemingly ordinary with a smidge of eeriness, as if something is about to happen.

The work refers to the damage caused by nuclear power, as art critic Huang Hai-Ming described, “…to observe the threat to humanity from everyday life.” In examining these images in a poetic way, Yuan Goang-Ming gently leads us to look at the coming threats to society.

Chou Yu-Cheng’s work, the most recent of which is titled with hashtags, has been seen in various biennials. Through mixed media and ready-made objects, he interprets the relationship between aesthetics and society, examining the sources of information, visualizing economic issues, presenting sharp and poetic insights into consumerism, capitalism and the social and ethical relationships within this system.

In Chou’s Chemical Gilding, Keep Calm, Galvanize, Pray, Gradient, Ashes, Manifestation, Unequal, Dissatisfaction, Capitalize, Incense Burner, Survival, Agitation, Hit, Day Light, exhibited at the Liverpool Biennial in 2018, a slab of galvanized steel located at the entrance to St George’s Hall was dented by visitors throwing rocks at it to reflect protests and movements around the world. Chou also shared his insight into Taiwanese society in the work. Chemically treated plates, common in Taiwan, are a metaphor for the temporary and contradictory mentality caused by high mortgage rates and low incomes. The material might look glamorous but, in reality, it is cheap and easily replaced. What’s underneath the seemingly strong surface is all the stress it bears. These words are used to describe our mental states: anxiety, resistance, and prayer, continuously cycling over and over. Isn’t every life under capitalism like this?

Looking back at the past ten years, biennials have focused on the violence of capitalism, the acceleration of technology, the crisis of the environment, the suffering and separation caused by wars. Many signified collective anxiety through their titles: “The future is already here – it’s just not evenly distributed”, the “Beautiful world, where are you?”, and “May You Live In Interesting Times”. Taiwanese artists active on the international stage react visually to the current global situation through their own contexts, reminding the audience not to look away, but to look closer in, asking the question of who we are, and how to make our voices heard, loudly and clearly, at this urgent time.

References
“The threat hidden in the positive daily experience – ‘Tomorrowland’, The solo show of Yuan Goang-Ming at TKG+ in 2018”, Huang Hai-Ming, the website of Taishin Arts Award, 2018.04.13
“Image crystallization under the rumination of Life – The radical experiment in Yuan Goang-Ming’s Tomorrowland”, Yan Xiaoxiao, ARTCO Monthly, April 2018
“The body image in the scene of death – the creative force field of Chen Chieh-Jen”, Wang Pin-hua, ACT 41, January 2010
“Break the unity of art – the compound aesthetic of Chou Yu-Cheng”, Kitty Lam, Art Collection, August 2016
“An Act of Seeing, an interview with Chou Yu-Cheng”, Esther Lu, publication of the exhibition “Never odd or even”