Jut Art Museum: Catalyst for the Aesthetics of Borderless Cities 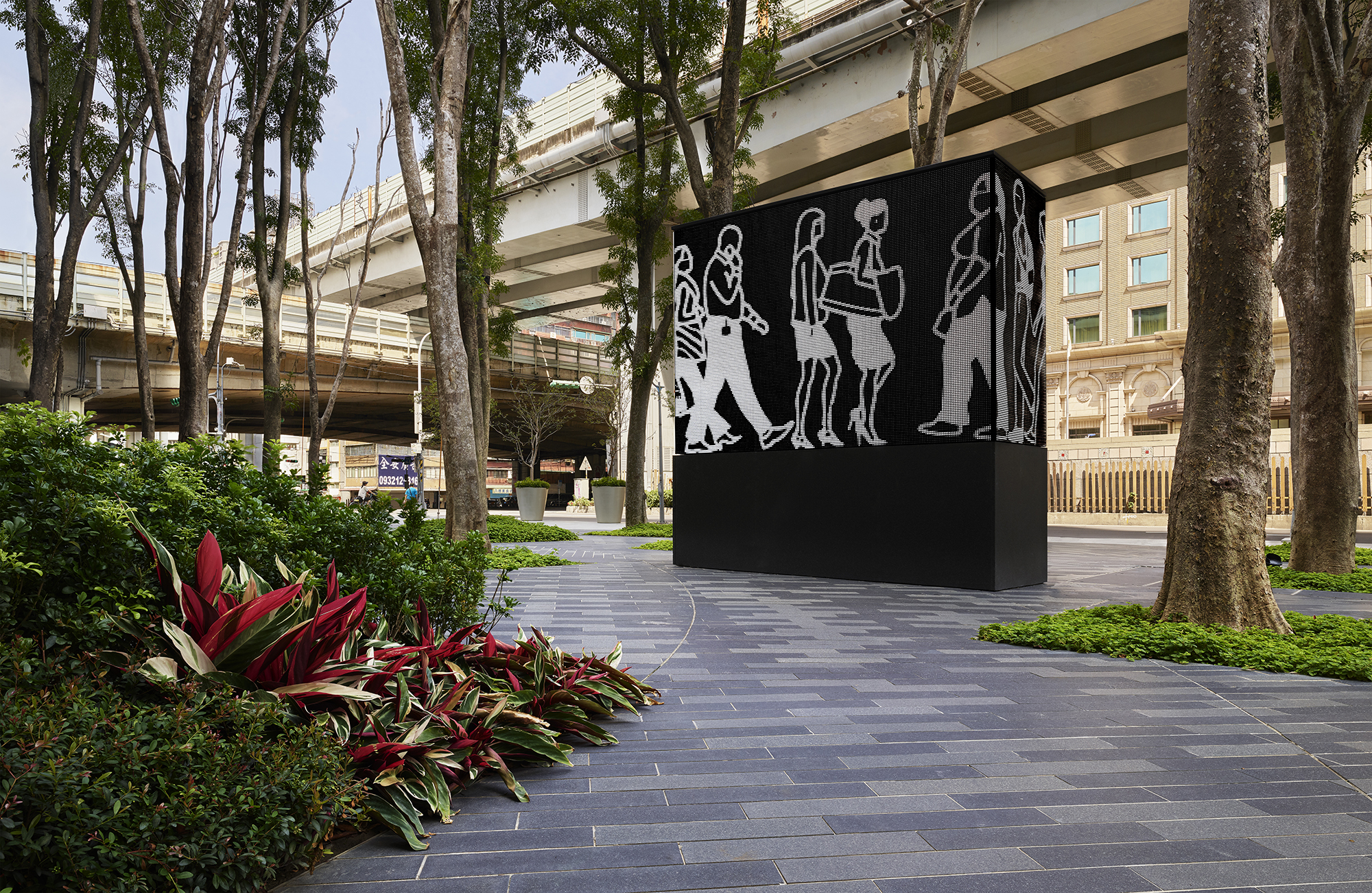 “An atypical museum. We want to make it a museum without boundaries the best we can so that our exhibitions can extend beyond the physical building,” said Aaron Lee, CEO of JuT Foundation for Arts and Architecture and VP of Jut Group.

The city is constructed of buildings to provide solid structures for human habitat. Another invisible form of the city is the spiritual trait, accumulated throughout history and culture, that condenses into the aesthetic practices flowing among the habitants; subsequently, the visible and invisible properties of the city are formed within the physical and spiritual interactions. Inspired by ideas and imagination of urban aesthetics, Jut Art Museum built the entrance to its venue at the Jut Group Headquarters in Taipei City at the end of 2016 – whereas the philosophy of this museum had been established earlier to then be put into action by the team.

Unlike many art museums that prioritize art collections or venue facilities, Jut Art Museum starts from the intangible philosophies and pays more attention to exhibition curation and knowledge production. The museum’s few art collections can be largely divided into two categories. One is public art placed around the building complex of Jut Group, e.g. Julian Opie’s largescale LED installation Walking in Taipei at the northern site that plays back pedestrians moving about in the city. The Great Assistantby Marco Casagrande is a fusion between the Finnish snowman and Japanese bonsai that adds warmth to the northwest corner adjacent to the elevated expressways of Civic Boulevard and Jianguo Road. The other is commissioned artwork originated from the exhibitions at the museum.

As early as two years prior to the opening of the museum, when the location of the museum was yet to be decided, the team had already started preparing for the debut exhibition HOME 2025 to imagine our homes in ten years. After conducting a series of studies and interviews, the team invited 29 architecture studios and 20 companies to work together to debut a cross-disciplinary fusion of urban architecture, humanistic future, and contemporary exhibitions. Dr. Lee Yuling, Director of Kaohsiung Museum of Fine Arts, invited this exemplary and innovative show to be further developed into an exhibition at the KMFA in 2018. Three years after its opening, Jut Art Museum invited five international and Taiwanese contemporary artists to participate in the art exhibition Paradise Lost – Gazing at Contemporary Urban Civilization and its Metaphor between 2019 and 2020. The artists are creatively inspired by man-made ruins of various context and background to explore the destruction and rebirth of contemporary urban civilization, as well as the role of human beings in such changes.

Interdisciplinary Imagination of the Future

In contrast to art museums that comb the history of visual arts, based on the longitudinal axis of time, to focus on the large and small chronological slices for research and presentation, the importance of urban aesthetics is no less than art itself for Jut Art Museum. Rather than looking back at the past, catalyzing the reformation of the future is obviously a more critical proposition for the museum. Therefore, “urban architecture” and “contemporary art,” along with “future issues,” would constitute the main developmental focus of Jut Art museum in the present to investigate the future. Coincidentally, this was also the focus of Jut Foundation for Arts & Architecture (JFAA) for over a decade before the museum was established under its umbrella to progressively explore the city through various activities and exhibitions in different locations. Since then, the museum gradually took its shape based on the solid long-term relationships with various sectors of society and consistent communication channels.

Jut Group, a land developer based in Taipei, is the parent company of Jut Foundation and Jut Art Museum. Aaron Lee, VP of Jut Group and founder of the foundation and art museum, mentioned his expectations of the museum in an interview, “An atypical museum. We want to make it a museum without boundaries the best we can so that our exhibitions can extend beyond the physical building.” The annual Off-Site Project held in various atypical environments away from the museum was the result of such an idea. In 2019, Agravic Starry Sky was jointly organized by the Off-Site Project and Songshan Cultural Park in Taipei to challenge the presentation of sound-space installation art. The museum also actively connects with other museums, such as assisting the National Taiwan Museum in setting up its digital collection for hand-drawn post-war architectural drawings and an exhibition was held in 2019. The Jut Art Museum also collaborated with Japanese and German organizations in art and architecture to launch various exhibitions in Taipei in 2020.

However, being “atypical” runs the risk of not being understood. It is relatively difficult for regular visitors of art exhibitions to clearly grasp the orientation of the museum from the multiple cross-disciplinary themes and scattered events beyond the physical boundaries. On the other hand, the strategy of a multiple spearheaded attack may be closer to the museum’s long-term goal of bringing the city to a better future through a wider range of mindset changes. Huang Shanshan, Director of Operations at Jut Art Museum, having worked at Jut Foundation for many years and is responsible for the preliminary planning and museum operations, talked about the museum’s vision, “There are three main directions. First, we hope to be an important platform for creativity and new ideas in Taiwan. Second, we seek to be the catalyst to enable different industries and generations to exchange, coagulate, and produce chemistry with each other. We also hope that the museum will become a think tank through the exhibitions, publications, video production, and urban studies to provide active thinking and nutrients that inspire Jut Group and the public.”

Compared with the public art museums in Taiwan and the various cultural institutions receiving government subsidies, Jut Art Museum is a private organization that enjoys a high degree of freedom in its operations. When it comes to the limitations and advantages of the museum, Huang Shanshan said, “The venue and resources are the biggest limiting factors, and flexibility is our greatest advantage. The best thing about working with the CEO is that he always pays attention to quality and expects us to create value, not money or bigger numbers.”

The museum has put a lot of effort into education through various seminars, workshops, film screenings, and visiting tours in pursuing dialogue and accumulating ideas. For example, the ZERO CITY– Marco Casagrande: Who Cares, Wins the Third Generation solo exhibition is a collaboration between Jut Art Museum and Xin Media where Marco Casagrande would lead a tour that starts from the Jut Art Museum and ends up at his work Ultra-Ruin, a private residence hidden deep in the suburban mountains of Taipei. Agravic Starry Sky—Off-Site Project, in collaboration with the LAB Activation Plan, happened at the Songshan Cultural Park and Jut Art Museum where artist Wolfgang Buttress and the music band BE would recreate the sound library of stars in the sky. Wang Fujui combined the local characteristics of Taiwan to compose the starry soundscape of the island on site with the team, and Ajohn Chen’s spatial beam installation Rendezvous II itself is highly interactive with the audience. The various live performances and discussion panels have shortened the distance between art and the public through these shared interactive activities.

The museum has also developed the unique “Teacher Network” and “Campus Ambassador” programs for schools. School teachers can share teaching and guided resources on the “Teacher Network” and around 35 teachers have participated to influence nearly 2,000 students visiting the museum in a year. High school and college volunteers are interviewed and recruited through formal applications as “Campus Ambassadors” to help promote the museum exhibitions and artist exchange events at school campuses.

Indeed, land developers are watched closely by the society. In terms of wealth in cultural capital, if used properly, they become one that is most capable of supporting arts and culture. Jut Foundation started relatively early in trying various ways to promote aesthetics and trigger creative thinking, carrying forward its practice in the form of an art museum.