Midnight Black is Chen Wan-Jen’s latest large-scale installation since 2017, In this new installation, Chen presents a group of swimming video devices that combine mechanical motors and Samsung’s flagship water-resistant smartphones. As the phone screens play looped videos of swimming figures, the swimmers seem to be leisurely moving in the sea of time that has no beginning nor end. The faint lights from the screens in the tranquil, black water are like lights on fishing boats floating on a vast, dark sea. Utilizing the motors’ physical movements and the swimmers’ virtual images, the artist creates an alternative space in between reality and virtuality, whereas the integration of display technology and video content reveals a new visual experience subverting existing conceptions.

The artist is known for using video and installation to capture repetitive blank fragments in life, employing the technique of image collage to repeatedly cut out, polish and combine each frame of image to create digital images that visualize the codified, flattened body in digital technology. Throughout the creation of the work, the artist has kept visiting the same location to take photos at different hours. After a while, the people under the camera lens started behaving in a repetitive pattern rather than a random one. The photographer and the photographed people have therefore become like old acquaintances, and their encounters embody the relationship between individuals as well as between people and the world. Viewing Chen’s work, viewers will see the same people showing up repeatedly while carrying out the same action. However, after watching these ordinary characters doing their seemingly futile activity for a few seconds, a resonating connection is formed between the viewers and the characters, producing an alternative sense of time unlike that of the everyday reality.

Born in Hsinchu, 1982, Chen Wan-Jen graduated from the Department of Fine Arts, National Taiwan University of Arts. He was awarded the first prize of Taipei Arts Awards in 2006 and invited to be an artist-in-residence at the International Studio & Curatorial Program in New York in 2012. In addition, he staged many exhibitions in art museums and spaces across Taiwan. He is skilled in capturing the repeatedly alternating blank fragments in his daily life with videos and installations. His one-of-a-kind visual vocabulary features an attractive combination of multiple elements and collaged digital images as finely as realistic paintings. Against the digital environment in which the human body is often codified, flattened, and decontextualized, the artist, by virtue of his artworks, represents the elapsing fragments of time as unapproachable and mechanical objects in motion. He evokes the metaphor of a continuous loop in a closed space to symbolize the social mechanism, transforming all kinds of actions into a ritual of waiting. It seems that waiting has become a collective consciousness or behavior along the elongated timeline, suspending in the flat and endless efflux of time with futility and nihility.

Wan-Jen Chen’s oeuvre has focused on images having neither beginning nor end. In his previous artworks, the quotidian situations or the moments of devastation tended to go on and on in an endless manner. The content of these images lingered over the moments right before the events unfolded, prompting the viewers to be on tenterhooks and find it absurd at first glance. After careful observation, however, the viewers would notice the profound insight it yielded about the present. As far as the artist is concerned, every chance encounter carries specific implications. The figures haphazardly passing by in front of the lens of the artist’s video camera were captured as unknown characters in his artworks. In the time-consuming and painstaking creative process, the artist treated and named these figures with an indescribable sense of intimacy. They are not only deprived of their histories and purposes but also detached from their original characteristics. Nonetheless, they find their own positions and leave their traces of movement in the artist’s works. The viewers are immersed in the world harboring infinite possibilities, as if they live the day in an endless loop. 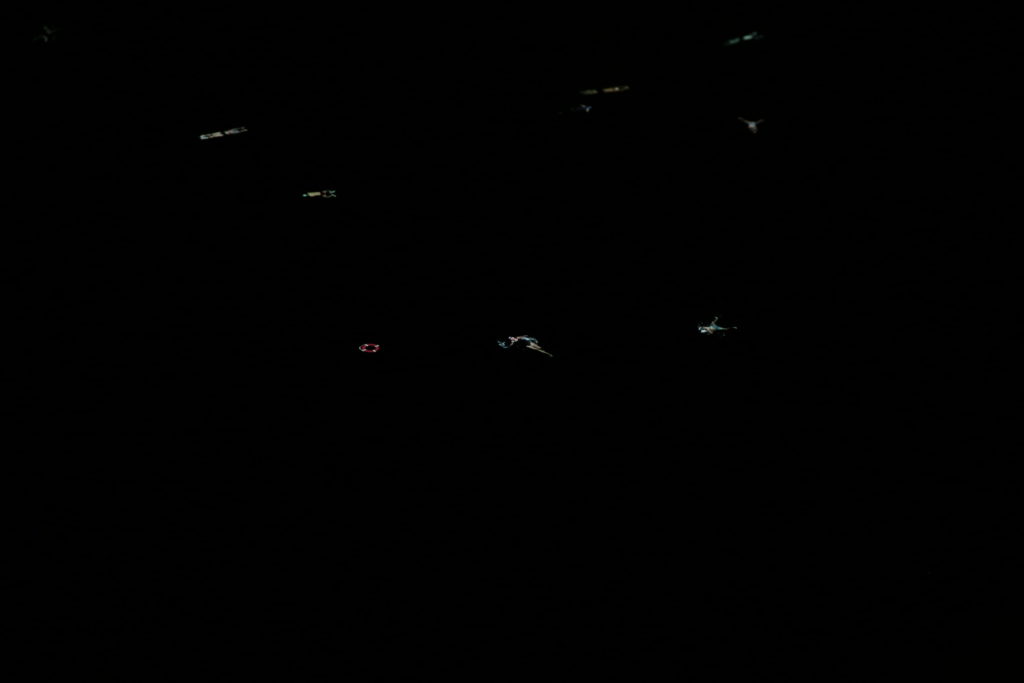 O night! O refreshing darkness! To me you are the signal for an inner feast, my deliverer from anguish! In the solitude of the plain, in the stony labyrinths of the metropolis, scintillation of stars, bright bursts of city lights, you are the fireworks of my goddess Liberty!

This is a midnight party – a gathering – in which everyone quietly immerses in his own world, having a spree.

Chen Wan-Jen’s Midnight Black comprises of video installations that combine mechanical motors and communication equipment and can automatically swim in water. The installations display looped videos of swimmers swimming in different style, symbolizing that people swim in an eternal sea of time. The faint lights from the cellphone screens in the tranquil, deep water are like lights on fishing boats floating on a vast, dark sea.

In Midnight Black, the photographer and the photographed people were strangers to each other. However, after the artist kept visiting the same location to take photos all the while intentionally prolonging his stay and increasing the number of visits, the people under the camera lens started behaving in a repetitive pattern rather than a random one. From coincidentally encountering one another at the beginning to gradually keeping running into each other, the photographer and the photographed people changed from being strangers to being like old acquaintances—those who have never really met become each other’s companions in their mind. Therefore, the floating images reveal a sense of alienation as well as a feeling of ease, delineating the encounters between people and the relationship between the world and the self.

In the midnight black, our wanders commence

With no beginning nor end,

As each moment is the start and every moment the end.